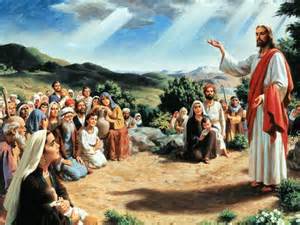 Jesus never hesitated to speak the words of his Father (John 6:38-40), just as those who have been born again of the Holy Spirit speak by its guidance in their life as they do not go to a seminary of man to learn of God but they are taught by God himself and speak as they are moved by his Spirit! (2 Peter 1:19-21). We have also a more sure word of prophecy; whereunto ye do well that ye take heed, as unto a light that shineth in a dark place, until the day dawn, and the day star arise in your hearts:Knowing this first, that no prophecy of the scripture is of any private interpretation. For the prophecy came not in old time by the will of man: but holy men of God spake as they were moved by the Holy Ghost.

Long before any brick was laid one upon another, it was the Spirit that spoke through and directed the people of God as seen in Moses, Samuel, Jeremiah and others and even now throughout our day and time. (2 Samuel 23:2-4). The Spirit of the Lord spake by me, and his word was in my tongue.The God of Israel said, the Rock of Israel spake to me, He that ruleth over men must be just, ruling in the fear of God.And he shall be as the light of the morning, when the sun riseth, even a morning without clouds; as the tender grass springing out of the earth by clear shining after rain.

Paul was not an apostle appointed by man, but was an apostle of Jesus Christ by the will of God and he told his son Timothy that his grandmother Lois and mother Eunice had a strong unfeigned faith as well. He saw this also in him of the wonderful Spirit that is given not of fear, but of power, love, and a sound mind! (2 Timothy 1:1,5-9). Paul, an apostle of Jesus Christ by the will of God, according to the promise of life which is in Christ Jesus, When I call to remembrance the unfeigned faith that is in thee, which dwelt first in thy grandmother Lois, and thy mother Eunice; and I am persuaded that in thee also.Wherefore I put thee in remembrance that thou stir up the gift of God, which is in thee by the putting on of my hands. For God hath not given us the spirit of fear; but of power, and of love, and of a sound mind. Be not thou therefore ashamed of the testimony of our Lord, nor of me his prisoner: but be thou partaker of the afflictions of the gospel according to the power of God;Who hath saved us, and called us with an holy calling, not according to our works, but according to his own purpose and grace, which was given us in Christ Jesus before the world began,

IT IS THE LORD AND NOT MAN that adds to the true church of God by his Spirit, and adds to this church daily those who are to be saved. (Acts 2:38,39,47). Then Peter said unto them, Repent, and be baptized every one of you in the name of Jesus Christ for the remission of sins, and ye shall receive the gift of the Holy Ghost. For the promise is unto you, and to your children, and to all that are afar off, even as many as the Lord our God shall call.  Praising God, and having favour with all the people. And the Lord added to the church daily such as should be saved.