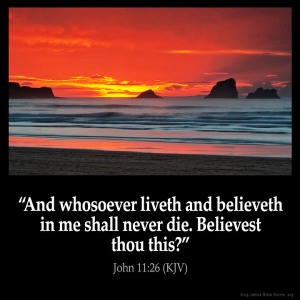 Lazarus was the perfect example in the New Testament that shows us the resurrection power of what Christ accomplished at the cross.When Jesus told Martha her brother would rise again she replied it would be in the resurrection at the last day,Jesus reply although was to her is also for us today as well!(John 11:21-26). 21 Then said Martha unto Jesus, Lord, if thou hadst been here, my brother had not died.22 But I know, that even now, whatsoever thou wilt ask of God, God will give it thee.23 Jesus saith unto her, Thy brother shall rise again.24 Martha saith unto him, I know that he shall rise again in the resurrection at the last day.25 Jesus said unto her, I am the resurrection, and the life: he that believeth in me, though he were dead, yet shall he live:26 And whosoever liveth and believeth in me shall never die. Believest thou this?

The spirit of God is an eternal one,and we may ask is there anywhere in the Old Testament the spirit of God raised the dead?The answer is yes as we read the story of Elisha who prayed for the son of a shu-nam’-mite woman who had died yet was brought back to life!(2 Kings 4:29-37). 29 Then he said to Gehazi, Gird up thy loins, and take my staff in thine hand, and go thy way: if thou meet any man, salute him not; and if any salute thee, answer him not again: and lay my staff upon the face of the child.30 And the mother of the child said, As the Lord liveth, and as thy soul liveth, I will not leave thee. And he arose, and followed her.31 And Gehazi passed on before them, and laid the staff upon the face of the child; but there was neither voice, nor hearing. Wherefore he went again to meet him, and told him, saying, The child is not awaked.32 And when Elisha was come into the house, behold, the child was dead, and laid upon his bed.33 He went in therefore, and shut the door upon them twain, and prayed unto the Lord.34 And he went up, and lay upon the child, and put his mouth upon his mouth, and his eyes upon his eyes, and his hands upon his hands: and stretched himself upon the child; and the flesh of the child waxed warm.35 Then he returned, and walked in the house to and fro; and went up, and stretched himself upon him: and the child sneezed seven times, and the child opened his eyes.36 And he called Gehazi, and said, Call this Shunammite. So he called her. And when she was come in unto him, he said, Take up thy son.37 Then she went in, and fell at his feet, and bowed herself to the ground, and took up her son, and went out.

As christians our testimony is similar to Paul’s in that we too suffer as Christ did which is our glory!(Ephesians 3:8-13).We too attain resurrection from death by the faith we hold in the one who died and gave His life for us Our Lord Jesus Christ (Philippians 3:7-11). 7 But what things were gain to me, those I counted loss for Christ.8 Yea doubtless, and I count all things but loss for the excellency of the knowledge of Christ Jesus my Lord: for whom I have suffered the loss of all things, and do count them but dung, that I may win Christ,9 And be found in him, not having mine own righteousness, which is of the law, but that which is through the faith of Christ, the righteousness which is of God by faith:10 That I may know him, and the power of his resurrection, and the fellowship of his sufferings, being made conformable unto his death;11 If by any means I might attain unto the resurrection of the dead.