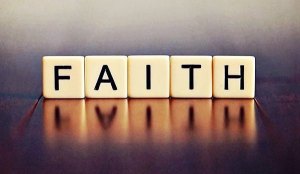 It is only human to not believe something unless it can be seen or proven,but God asks us to see things through eyes of faith by putting our full trust in Him to bring it to pass.After all this is the way God thinks,for He calls things into being that are not and sees it as though it is!Abraham had such a faith(Romans 4:16-25), 16 Therefore it is of faith, that it might be by grace; to the end the promise might be sure to all the seed; not to that only which is of the law, but to that also which is of the faith of Abraham; who is the father of us all,17 (As it is written, I have made thee a father of many nations,) before him whom he believed, even God, who quickeneth the dead, and calleth those things which be not as though they were.18 Who against hope believed in hope, that he might become the father of many nations, according to that which was spoken, So shall thy seed be.19 And being not weak in faith, he considered not his own body now dead, when he was about an hundred years old, neither yet the deadness of Sarah’s womb:20 He staggered not at the promise of God through unbelief; but was strong in faith, giving glory to God;21 And being fully persuaded that, what he had promised, he was able also to perform.22 And therefore it was imputed to him for righteousness.23 Now it was not written for his sake alone, that it was imputed to him;24 But for us also, to whom it shall be imputed, if we believe on him that raised up Jesus our Lord from the dead;25 Who was delivered for our offences, and was raised again for our justification. (Genesis 17:1-7).

The greatest show of our faith is believing in the one we have never physically seen yet know by believing in the Lord Jesus Christ we have hope of eternal life.Peter learned the lesson that when we follow Him we do not lose family,lands or brethren but even though we are persecuted gain all including the eternal world to come(Mark 10:27-31). 27 And Jesus looking upon them saith, With men it is impossible, but not with God: for with God all things are possible.28 Then Peter began to say unto him, Lo, we have left all, and have followed thee.29 And Jesus answered and said, Verily I say unto you, There is no man that hath left house, or brethren, or sisters, or father, or mother, or wife, or children, or lands, for my sake, and the gospel’s,30 But he shall receive an hundredfold now in this time, houses, and brethren, and sisters, and mothers, and children, and lands, with persecutions; and in the world to come eternal life.31 But many that are first shall be last; and the last first.