First we need to learn who is the LIGHT so that we may become followers of that LIGHT. Believers in Christ know Jesus is the word of God and the LIGHT of men. (John 1:1-5). In the beginning was the Word, and the Word was with God, and the Word was God. The same was in the beginning with God. All things were made by him; and without him was not any thing made that was made. In him was life; and the life was the light of men.  And the light shineth in darkness; and the darkness comprehended it not…… (John 8:12).

This temporary place we pass through is known as the land of the shadow of death, and our only way out is to trust in God and have faith in Christ the LIGHT of life! The great LIGHT that has been sent to us was foretold of long ago as we read in the book of (Isaiah 9:2,6-8). The people that walked in darkness have seen a great light: they that dwell in the land of the shadow of death, upon them hath the light shined.  For unto us a child is born, unto us a son is given: and the government shall be upon his shoulder: and his name shall be called Wonderful, Counsellor, The mighty God, The everlasting Father, The Prince of Peace. Of the increase of his government and peace there shall be no end, upon the throne of David, and upon his kingdom, to order it, and to establish it with judgment and with justice from henceforth even for ever. The zeal of the Lord of hosts will perform this. The Lord sent a word into Jacob, and it hath lighted upon Israel. (Psalm 23:4)

We do not have to look far to see not all people have faith and are followers of the LIGHT of Christ, and it would be heaven on earth if some did not choose the deeds of darkness. People bring condemnation upon themselves by the choice of denying the LIGHT sent to the world for their salvation. (John 3:17-21).  For God sent not his Son into the world to condemn the world; but that the world through him might be saved. He that believeth on him is not condemned: but he that believeth not is condemned already, because he hath not believed in the name of the only begotten Son of God. And this is the condemnation, that light is come into the world, and men loved darkness rather than light, because their deeds were evil. For every one that doeth evil hateth the light, neither cometh to the light, lest his deeds should be reproved. But he that doeth truth cometh to the light, that his deeds may be made manifest, that they are wrought in God.

It is written the fool walks in darkness, but the wise gain knowledge and excels. (Ecclesiastes 2:13,14). For those who do not believe have the gospel hid from them by the god of this world who is satan, but there is always hope for anyone that the gospel of Christ can shine in their life when their heart turns to HIM! (2 Corinthians 4:3-6).  But if our gospel be hid, it is hid to them that are lost: In whom the god of this world hath blinded the minds of them which believe not, lest the light of the glorious gospel of Christ, who is the image of God, should shine unto them. For we preach not ourselves, but Christ Jesus the Lord; and ourselves your servants for Jesus’ sake. For God, who commanded the light to shine out of darkness, hath shined in our hearts, to give the light of the knowledge of the glory of God in the face of Jesus Christ.

MATTHEW 5:14-16… Ye are the light of the world. A city that is set on an hill cannot be hid. Neither do men light a candle, and put it under a bushel, but on a candlestick; and it giveth light unto all that are in the house. Let your light so shine before men, that they may see your good works, and glorify your Father which is in heaven. 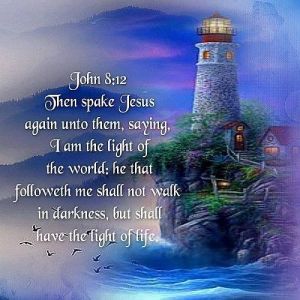 2 thoughts on “Children of light”