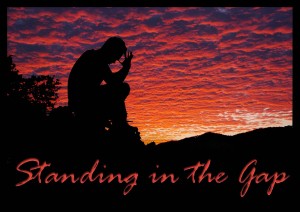 There are times when we will help another by going before someone on their behalf. God also will take a stand on our behalf, but only if our heart is set on Him. As Asa the king of Judah found out he should have relied solely on the Lord. (2 Chronicles 16:7-9). And at that time Hanani the seer came to Asa king of Judah, and said unto him, Because thou hast relied on the king of Syria, and not relied on the Lord thy God, therefore is the host of the king of Syria escaped out of thine hand. Were not the Ethiopians and the Lubims a huge host, with very many chariots and horsemen? yet, because thou didst rely on the Lord, he delivered them into thine hand. For the eyes of the Lord run to and fro throughout the whole earth, to shew himself strong in the behalf of them whose heart is perfect toward him. Herein thou hast done foolishly: therefore from henceforth thou shalt have wars.

When people will not stand for the truth of the holy word of God then they leave him no other choice than to return upon their own head the way they have chosen for themselves . Therefore it is of greater value to take a stand for God then to go where God is not! (Ezekiel 22:29-31) The people of the land have used oppression, and exercised robbery, and have vexed the poor and needy: yea, they have oppressed the stranger wrongfully. And I sought for a man among them, that should make up the hedge, and stand in the gap before me for the land, that I should not destroy it: but I found none. Therefore have I poured out mine indignation upon them; I have consumed them with the fire of my wrath: their way have I recompensed upon their heads, saith the Lord.

To stand in the hedge is to at all costs do what is good and right in behalf of another. There is no greater person who has been chosen to be an intercessor for us all, as we see in the Lord Jesus Christ our redeemer! (Hebrews 7:24-28)  But this man, because he continueth ever, hath an unchangeable priesthood. Wherefore he is able also to save them to the uttermost that come unto God by him, seeing he ever liveth to make intercession for them. For such an high priest became us, who is holy, harmless, undefiled, separate from sinners, and made higher than the heavens; Who needeth not daily, as those high priests, to offer up sacrifice, first for his own sins, and then for the people’s: for this he did once, when he offered up himself. For the law maketh men high priests which have infirmity; but the word of the oath, which was since the law, maketh the Son, who is consecrated for evermore.

We are never alone in this life,for we have a Good and loving God who intercedes for those who keep their faith in Him! Just as we stand in the hedge on behalf of another, so does God through His Son make intercession for us through His spirit (Romans 8:24-28) For we are saved by hope: but hope that is seen is not hope: for what a man seeth, why doth he yet hope for? But if we hope for that we see not, then do we with patience wait for it. Likewise the Spirit also helpeth our infirmities: for we know not what we should pray for as we ought: but the Spirit itself maketh intercession for us with groanings which cannot be uttered. And he that searcheth the hearts knoweth what is the mind of the Spirit, because he maketh intercession for the saints according to the will of God. And we know that all things work together for good to them that love God, to them who are the called according to his purpose.

We are told the field’s are ripe for the harvest, but the labourer’s are few! There are not many who will stand in the hedge for God……Will You?

5 thoughts on “Standing In The Hedge”