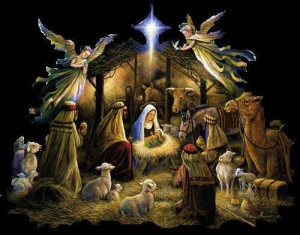 The holiday of Christmas is just around the corner. Some celebrate and not question just where did this tradition of man come from,while others say it is so commercialized and they just focus on the birth of Christ. This time of year places people together with others they have not seen for months or maybe not all year,but it is expected and the stress level goes up.

The suicide rate is at it’s highest around this time of year,and many businesses solely rely on the income to recover losses from the years quota. Business’s go from RED to BLACK. Hence Black Friday where all the frenzied shopping begins, all in the name of the Lord of course. Debt is encured by many and they do not recover for months. Can we really not take notice of who is truly behind this time of year that supports traditions and festivities more than honoring God? When the letters are moved around of the word SANTA – satan is in clear view.

Would God really put all this on his children?…….Debt,suicide,high stress? Just who do we follow as Believers? Traditions of men or God’s pure promises?

WHEN WAS JESUS BORN?

Just as scripture teaches no man knows the hour our Lord will return,but there are signs given for when the time would be near (Matthew 24),so it is with His birth as BY SCRIPTURE we can definitely see He was not born in DECEMBER.

It is important to note in the days when Christ was born the Jews went by the Jewish calendar and not the Gregorian one we go by today. This is a vital piece of information and will best explain just how this holiday came into being.

In Luke 1:5 we learn that Zacharias is a priest and is serving his course of Abia which is (June 13-19).His job was to burn incense when in the temple. Luke V:9….It is at this time the Angel Gabriel appears to the right side of the altar of incense to him Luke V:11….Zacharias is then told his prayer has been heard and his wife Elizabeth would conceive and bear a son to be named John. Luke V:13….Zacharias does not believe the words of the Angel and therefore was struck dumb and unable to speak. Luke V:19,20….In the Sixth Month (DECEMBER) the  same Angel then visits a virgin named Mary and is told she has found favour in the eyes of God. Mary is told that her cousin Elizabeth is already pregnant and is in her sixth month. Luke V:36,37….We learn now this is the month of (DECEMBER), because Zacharias was told Elizabeth would conceive a son named John when the Angel Gabriel said to Zacharias when he served the course of Abia in June!(June-December=6 Mos) Mary is now receiving the news that she too will conceive. THIS TELLS US MARY CONCEIVED IN DECEMBER and not gave birth til September! (December-September=9 Mos).

Mary stays with her cousin Elizabeth for three months til she delivers John the Baptist in March. Luke V:56….(June-March is 9 mos)Then the eighth day came when it was time to circumcise the child and it was said the child would be named Zacarias after his Father….But Elizabeth says no his name shall be John (The baptist) Luke V 59,60…. When they ask Zacharias the name they handed him a paper for he could not speak since being struck dumb for unbelief.His tongue was then loosed and able to speak. Luke V:63,64….Zacharias then is filled with the Holy Ghost and begins to prophesy that the child John will be the prophet of the highest for he would go before the face of the Lord(Jesus) to prepare his ways and to give knowledge of Salvation to the people and remission of their sins.

Then the decree came forth for all the world to be taxed and it was at this time Mary would deliver our Saviour Jesus Christ in SEPTEMBER! Luke 2:1-7  The birth took place in Bethlehem and to have the Shepherds abiding in the field, keeping watch over their flocks by night this would be true in the month of SEPTEMBER,for the rainy season is coming and there would be no way the flocks would be in the fields in DECEMBER!

4 thoughts on “When was Jesus Born?”