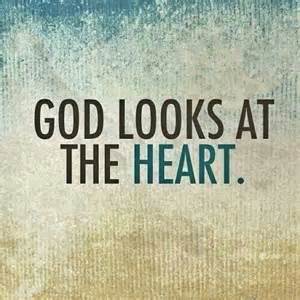 Our hearts are very important to God because He does not see as man does, for man looks on the outward appearance and He looks on the heart.(1 Samuel 16:7).  But the Lord said unto Samuel, Look not on his countenance, or on the height of his stature; because I have refused him: for the Lord seeth not as man seeth; for man looketh on the outward appearance, but the Lord looketh on the heart.

God understands our heart like no other and He like us has many emotions, we see this when He was sore grieved at His heart after seeing man’s heart was continually set on evil. (Genesis 6:5,6).

We have heard the phrase they are a person after my own heart, but did you know this saying goes way back and was spoken long ago when after forty years Saul was king and David reigned in his stead saying “He is a man after mine own heart”. (Acts 13:20-22).  And after that he gave unto them judges about the space of four hundred and fifty years, until Samuel the prophet. And afterward they desired a king: and God gave unto them Saul the son of Cis, a man of the tribe of Benjamin, by the space of forty years. And when he had removed him, he raised up unto them David to be their king; to whom also he gave their testimony, and said, I have found David the son of Jesse, a man after mine own heart, which shall fulfil all my will.