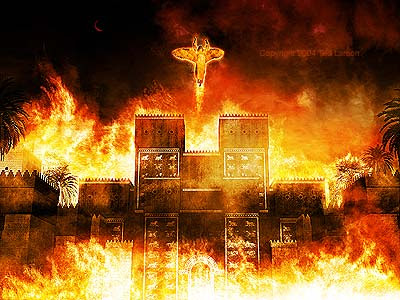 had better learn to be

Other peoples in other lands have learned this.  Ask the strong North Korean Christians and their vibrant church, in the face of dire persecution. They have learned to set their affections on CHRIST and on HIM+ alone. In their hearts, their citizenship has changed from this earth to Heaven, even as they live. Certainly as they die.

Ask the Nubian Christians who are living in caves and great deprivation due to the “un-controllable”, well-paid jihadists of Africa.  Yet, these Nubian Christians will forsake neither their fellow Christians hiding and starving nor their LORD JESUS CHRIST… at great, life-threatening peril to them and their families who are as dear to them as ours are to us.

They have learned to be CONTENT WITH CHRIST until they draw their last breath in this spiritual battle for souls.

shall be the fourth kingdom upon earth,

which shall be diverse from all kingdoms,

and shall tread it down,

and break it in pieces.

And the ten horns out of this kingdom

are ten kings that shall arise:

and another shall rise after them;

and he shall be diverse from the first,

and he shall subdue three kings.

And he shall speak great words

against the MOST HIGH,

and shall wear out the saints

of the MOST HIGH,

and think to change times and laws:

and they shall be given into his hand

until a time and times

and the dividing of time.

The Syrian Christians are learning to be CONTENT WITH CHRIST as the arm of the “10 Kings” of Revelation 17 , the USA-funded jihadists, have set about to destroy their lives.

The goal of the “10 Kings” is to stamp out everything and everyone that bears witness to The LORD JESUS CHRIST … the ONE+ WHO+ is coming again in flaming FIRE to destroy all those who do not acknowledge JESUS as LORD of the human race.

And to you who are troubled rest with us,

when the LORD JESUS

shall be revealed from heaven

with HIS+ mighty angels,

taking vengeance on them

that know not GOD,

that obey not the gospel

of our LORD JESUS CHRIST:

Who shall be punished

from the Presence of the LORD,

and from the glory of HIS+ power;

requires a RE-FOCUSING of our lives.

We Christians are NOT living in the “good, ol’ U S of A” anymore; neither are the Europeans able to live their “Christian” lives in their old, familiar cultures of their respective countries any longer.

It has been an ILLUSION

all along, you see.

Constitutions and a variety of the “Bill of Rights” are written on paper and paper documents have never protected anyone from the evil machinations of wicked men. Nor will they protect anyone from the evil determined upon the human race by the “10 Kings” of Revelation 17.

The “10 kings” are beginning their War against The LAMB+, but The LAMB shall DESTROY THEM, for HE+ is KING of Kings and LORD+ of lords.  Let us stand with and for The LAMB+ Who is our Life.

These “10 Kings” are determined to have world dominion, just like the WORD of GOD tells us, and are RUTHLESS as they go about to obtain it — exactly as The WORD+ of GOD warns us that they would be.

It is the ONLY freedom that has EVER been available to the fallen human race. The Great ILLUSION is that mankind can “grant” freedom to one another.

Democracy where the people rule is an illusion because “the people” are un-Redeemed from their fallen nature, and the fallen nature will NATURALLY BE GUIDED BY the satan. Thus, the satan will be the ruler, not the people.  It is the “default” setting of the human race , without JESUS at the Leadership Position.

The worldly governments CANNOT — that is, are NOT ABLE — to give freedom to anyone.  They themselves are law-breakers because they are fallen men; they are not even ABLE to keep the Righteousness that is in GOD.  Thus, they cannot grant “freedom” to any other ones.

The Great ILLUSION is about to be shattered in Western Civilization. These nations have mingled Following CHRIST with patriotism, following their nations.  Christians have ERRONEOUSLY attributed “freedom” of life to their Constitutions and laws and national spirit. The ONLY TRUE freedom comes from GOD ALONE. Apart from HIM+ nations are UNDONE and will Crumble.

Soon, this Great ILLUSION is going to be shattered, broken for all time, never to be restored.

In His+ Appointed Time, the LORD JESUS will be revealed just before the “10 Kings” of Revelation 17 and Daniel 7 do everything in their power to destroy the witness of The ELOHIM ( The FATHER, HIS SON+ JESUS CHRIST, and the HOLY SPIRIT ) from off the earth.

“Come, let us kill the HEIR+

and seize the inheritance” they say

They will succeed…   almost.

Then they will be STOPPED in their tracks!

Hard times are before us, a tribulation that has never been seen in this world since the beginning of time and never will be seen ever again.  This is a promise that we do not like to “claim”, but it is true because The LORD JESUS told us it was coming ( Matthew 24:21).

Life is going to become worse — MUCH WORSE — before it becomes better.

If not, we will not make it through the shattering of the Great ILLUSION.

3 thoughts on “The BROKEN ILLUSION”