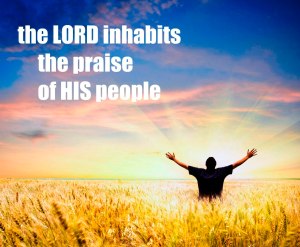 When we’re in the midst of a difficult situation the last thing we want to do is lift up praises,but it is this very thing believe it or not that turns things around.We see this example more than once in scripture,in the story of Jobs travail in the loss of everything he held dear, yet did not blame God but praised Him!(Job Chapter 1).Then there is the story of in all places Paul and Silas praising God while in prison (Acts 16:25-34). 25 And at midnight Paul and Silas prayed, and sang praises unto God: and the prisoners heard them.26 And suddenly there was a great earthquake, so that the foundations of the prison were shaken: and immediately all the doors were opened, and every one’s bands were loosed.27 And the keeper of the prison awaking out of his sleep, and seeing the prison doors open, he drew out his sword, and would have killed himself, supposing that the prisoners had been fled.28 But Paul cried with a loud voice, saying, Do thyself no harm: for we are all here.29 Then he called for a light, and sprang in, and came trembling, and fell down before Paul and Silas,30 And brought them out, and said, Sirs, what must I do to be saved?31 And they said, Believe on the Lord Jesus Christ, and thou shalt be saved, and thy house.32 And they spake unto him the word of the Lord, and to all that were in his house.33 And he took them the same hour of the night, and washed their stripes; and was baptized, he and all his, straightway.34 And when he had brought them into his house, he set meat before them, and rejoiced, believing in God with all his house.

We may wonder how can anyone think of praising God when things are falling apart,but that is the difference of the christians walk that it is to be thankful and draw closer to God for He alone is our eternal hope and help as we see what David did when saved from his enemies (Psalm 18:46-50). 46 The Lord liveth; and blessed be my rock; and let the God of my salvation be exalted.47 It is God that avengeth me, and subdueth the people under me.48 He delivereth me from mine enemies: yea, thou liftest me up above those that rise up against me: thou hast delivered me from the violent man.49 Therefore will I give thanks unto thee, O Lord, among the heathen, and sing praises unto thy name.50 Great deliverance giveth he to his king; and sheweth mercy to his anointed, to David, and to his seed for evermore.

The Lord is our refuge,healer,strength,redeemer and He is our life! (Colossians 3:1-4).  If ye then be risen with Christ, seek those things which are above, where Christ sitteth on the right hand of God.2 Set your affection on things above, not on things on the earth.3 For ye are dead, and your life is hid with Christ in God.4 When Christ, who is our life, shall appear, then shall ye also appear with him in glory.