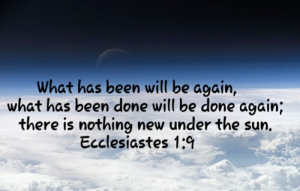 i By Julia and CJ

12 Now we have received, not the spirit of the world, but the spirit which is of God; that we might know the things that are freely given to us of God.

13 Which things also we speak, not in the words which man’s wisdom teacheth, but which the Holy Ghost teacheth; comparing spiritual things with spiritual.

14 But the natural man receiveth not the things of the Spirit of God: for they are foolishness unto him: neither can he know them, because they are spiritually discerned.

15 But he that is spiritual judgeth all things, yet he himself is judged of no man.

16 For who hath known the mind of the Lord, that he may instruct him? but we have the mind of Christ.

As we watch the world turn darker, America is changing also.  Turning darker and sliding toward the pit of darkness at alarming rates.   Falling farther from Gods word and the Doctrine of Christ, it’s prophecied but we also find that darkness is being revealed and we are finding there is nothing new under the sun.  Since the beginning of time, darkness continues to repeat itself.   Throughout the Bible we see the same spirit present.  We have even seen this spirit in modern times, take Hitler for example.  The same lies are seen with him as seen in ancient times and now today.

While researching this  post I found these quotes from Hitler’s propaganda minister George Goebbels. ( all italicized words are from Goebbels diary) All we lack is a religious genius capable of uprooting outmoded religious practices and putting new ones in their place.

I had to stop and go back, it literally dropped my mouth open.  You see Hillary Clinton said this in a 2015 speech attempting to justify abortion as equated with womens rights:   “And deep seated cultural codes, religious beliefs and structural biases have to be changed.”

Wow guess where the mirror quote that stopped me in my tracks came from?  Hitler’s propaganda ministers diary.  Yep Goebbels diary.  Now is it clear??

The fact that modern dark elites are quoting the darkest hour of the modern world should be eye opening.  Yet we continue in blindness.  As our opening verse tells us we are to judge with the Spirit.  But we have been conditioned to align ourselves with darkness and again the church is enveloping itself with this dark doctrine.

In this same research we find evidence that Hitler believed he was God.

One day soon National Socialism will be the religion of all Germans. My Party is my church, and I believe I serve the Lord best if I do his will, and liberate my oppressed people from the fetters of slavery. That is my gospel.

The Fuhrer is deeply religious, though completely anti-Christian. He views Christianity as a symptom of decay. Rightly so. It is a branch of the Jewish race.
I must admit I have never read all of Dietrich Bonhoeffer’s books but researching this post I have come to understand that he was a light shining in the darkness that Christianity had enveloped itself in,  in that age.  He was martyred  for trying to expose this.

We could write volumes on this, but for now we only want to show how nothing is new under the sun.  The great deception is in full swing, and the greatest liar that ever was is writing the script.  Elites and media all over the world have learned this tactic well.  We’ve said before that satan knows the scripture very well.  He knows that followers of Gods word and Christs doctrine wont be easily turned away.  So we see his tactics used throughout time, and here it is in black and white still being used today so subtle its turning whole bodies of Christ to Him.

The best propaganda is that which, as it were, works invisibly, penetrates the whole of life without the public having any knowledge of the propagandistic initiative.

We see this in the demonization of Israel not only in history but today.  There is an abomination denying Gods people, it denies and proclaims that it is the only true God, and it’s set to claim the Holy Mountain of God as its headquarters.  There is a great battle unnoticed by most under cover of interfaith and crying the same as the above quotes by Hitler’s minister, claiming the High Holy place belongs to them and them alone and even large portions of the body of Christ have fallen into line with this prophesied evil.  Hamas (backed by Iran) claimed this week that Jerusalem and the Temple Mount would soon be the headquarters of Islam.  Completely ignoring the fact that Saudi Arabia holds the center of Islam in Mecca, they want the highest Holy Place of Gods people.  To declare to the world that it is the only God.  Time to wake up.

We do not have to look far to see the decline of America, or of the world for that matter. All is right in line with scripture as we read what the condition the world will be in before the Lord returns as things will be in total disarray.( Matthew Chapter 24 )

If we ask are people lovers of self or are they without natural affection as God ordained things to be? The answer would be yes as we see same sex marriages and those who believe its perfectly fine to be transgender and play God by changing who they were created to be. God needs no help with His creation. ( 2 Timothy 3:1-7 ).

We’ve seen this beast rising, we’ve seen more disasters and weather changes in a year than we have in decades.  Even scientists are shaking their heads.  So why are we still denying Gods power?

Credit to Bible Gateway and Wiki-quotes