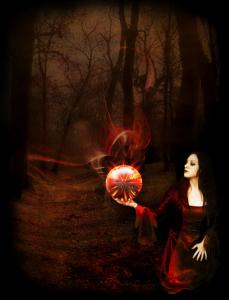 We may not think to be rebellious or that witchcraft is a sin, but scripture teaches us that it is. Today the following of witchcraft is fast becoming more and more popular, especially with the younger generation. Who would ever think to be stubborn is considered idolatry. When Saul rebelled against the Lord he was kept from being king because of it (1 Samuel 15:23-26). 23 For rebellion is as the sin of witchcraft, and stubbornness is as iniquity and idolatry. Because thou hast rejected the word of the LORD, he hath also rejected thee from being king. 24 And Saul said unto Samuel, I have sinned: for I have transgressed the commandment of the LORD, and thy words: because I feared the people, and obeyed their voice. 25 Now therefore, I pray thee, pardon my sin, and turn again with me, that I may worship the LORD. 26 And Samuel said unto Saul, I will not return with thee: for thou hast rejected the word of the LORD, and the LORD hath rejected thee from being king over Israel.

People may not know that witchcraft is known by many other names, but no matter what the label it is all against the righteousness of God! The following are other names for the same practice….. Divination,observer of times, enchanter, wizard, crystal balls, charmer, familiar spirit’s, necromancer, sorcery, soothsayers, using of tarot cards and crystals , astrology and magic. All are an abomination to the Lord God and from the innocent appeal of Harry Potter series to magic shows all have consequences for living outside of Gods will (Deuteronomy 18:10-14). 10 There shall not be found among you any one that maketh his son or his daughter to pass through the fire, or that useth divination, or an observer of times, or an enchanter, or a witch, 11 Or a charmer, or a consulter with familiar spirits, or a wizard, or a necromancer. 12 For all that do these things are an abomination unto the LORD: and because of these abominations the LORD thy God doth drive them out from before thee. 13 Thou shalt be perfect with the LORD thy God. 14 For these nations, which thou shalt possess, hearkened unto observers of times, and unto diviners: but as for thee, the LORD thy God hath not suffered thee so to do.

The enemy of our soul always packages sin to look and seem like such fun. Alot of people follow astrology and use ouija boards, not knowing the harm they are doing themselves. Daniel knew very well the practices King Neb-u-chad-nez-zar surrounded himself with such as his astrologers and magicians which could never give the King the answers or interpretation he wanted from the troubling dream he had. Daniel told him only God in heaven can reveal the answer he sought (Daniel 2:25-30).

8 thoughts on “Rebellion and witchcraft”