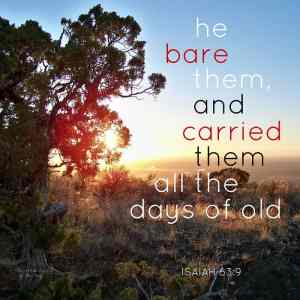 Did you know the Holy Spirit our Lord promised to send us spoken of in the New Testament was always in the earth? Some believe it was only the Lord God in the earth in the days of old, but Moses was guided and led by the Spirit of God as a shepherd who led the Israelites out of Egypt. (Isaiah 63:7-14).  I will mention the lovingkindnesses of the Lord, and the praises of the Lord, according to all that the Lord hath bestowed on us, and the great goodness toward the house of Israel, which he hath bestowed on them according to his mercies, and according to the multitude of his lovingkindnesses. For he said, Surely they are my people, children that will not lie: so he was their Saviour. In all their affliction he was afflicted, and the angel of his presence saved them: in his love and in his pity he redeemed them; and he bare them, and carried them all the days of old. But they rebelled, and vexed his holy Spirit: therefore he was turned to be their enemy, and he fought against them. Then he remembered the days of old, Moses, and his people, saying, Where is he that brought them up out of the sea with the shepherd of his flock? where is he that put his holy Spirit within him? That led them by the right hand of Moses with his glorious arm, dividing the water before them, to make himself an everlasting name? That led them through the deep, as an horse in the wilderness, that they should not stumble? As a beast goeth down into the valley, the Spirit of the Lord caused him to rest: so didst thou lead thy people, to make thyself a glorious name.

God tells us of His unchangeable ways and is a God of His word, for as it is spoken He brings it to pass of old. Although man may set up his idols to worship, yet our one true God cannot be compared to them for He is God and there is no one like Him! (Isaiah 46:5-10).  To whom will ye liken me, and make me equal, and compare me, that we may be like? They lavish gold out of the bag, and weigh silver in the balance, and hire a goldsmith; and he maketh it a god: they fall down, yea, they worship. They bear him upon the shoulder, they carry him, and set him in his place, and he standeth; from his place shall he not remove: yea, one shall cry unto him, yet can he not answer, nor save him out of his trouble. Remember this, and shew yourselves men: bring it again to mind, O ye transgressors. Remember the former things of old: for I am God, and there is none else; I am God, and there is none like me, Declaring the end from the beginning, and from ancient times the things that are not yet done, saying, My counsel shall stand, and I will do all my pleasure.

How can we not put our full trust in God who has always been since the foundation of the world and the days of old? A God that is eternal in the heavens! (Psalm 74:12) For God is my King of old, working salvation in the midst of the earth.

6 thoughts on “The Days Of Old”