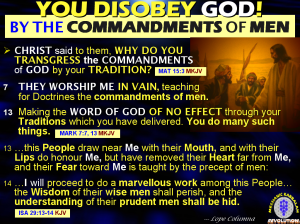 The following posts come to us from the website THE EZEKIEL 33 WATCHMAN REPORT. There will be 7 Posts to complete this article and I pray it will be a Blessing to you my readers.

Doctrines and Traditions of Men

How many doctrines can a Christian man learn, and how many traditions can he observe? The answer my friend is set forth by the councils of men, and there are many blowing in the wind. In Bob Dylan’s song, “Blowing in the Wind”, the answers to all the world’s problems stated in its lyrics were blowing in the wind.

In these latter days, there are many believers in Christendom who fly in the winds of doctrine. They may be searching for truth, intrigue, or simply enjoy church hopping. The numerous denominational, non-denominational, freewill ministerial, philosophically hybridized, theologically engineered, and humanistic doctrines to choose from is like an open buffet with all you can eat for a simple price. Searching for truth in the vast sea of confusion and deception is like searching Wal-Mart for something not made in China or made in the USA.

Since the beginning of Christianity, many false doctrines and traditions have crept into Christendom. Most have been in practice for over a thousand years. The early Apostles warned the followers of Christ that there would be a falling away prior to his return. (2 Th. 2:1-12) The Apostle Peter warned of false teachers making merchandise of the sheep. (2 Pet. 2:1-3) Jesus Christ prophesied that there would be many coming in his name preaching about him and saying that he was indeed the Christ but deceiving many. How? Most teach their own ideological doctrines. (Matt. 24:4-5, 15:8-9, 7:21-23; Is. 29:13)

The Jews that became followers of Jesus Christ had a better understanding of God’s ways than the Gentiles because of the former knowledge given them. The only thing that the Jews were lacking was a true spiritual understanding of the knowledge they possessed prior to the teachings of Christ. They were well adept in the letter of the law but had many shortcomings in the spirit of the law.

Many gentiles believed the Gospel (good news) of the Kingdom of God when it was delivered to them, but had to discard their pagan customs and be instructed in God’s commandments and ways. The biggest problem in the early church was some of the converted Pharisees zealousness in getting their hands on the converted Gentile’s penises to cut off their foreskins. (Acts 15:5) The Apostle Paul had a difficult time convincing them that it was circumcision of the heart and not the flesh that was more important. (Deut. 10:16; Jer. 4:4, 9:25; Jn. 7:21-24) The legalistic issue in John 7:21-24 was the performing of circumcision (custom/law of Moses) on the Sabbath (commandment) versus the healing of a man on the Sabbath. They condemned the Lord for healing a man and making him whole on the Sabbath, yet they considered it lawful to whack off the foreskin of a male child’s penis. Should the lawful custom of men supersede the doing of a good deed on the Lord’s holy  day?

The Gentiles were accustomed to paying tribute to their false gods and keeping the pagan customs of the time. They worshipped the Greek and Roman deities and/or the deities that had been worshipped during Old Testament times. The Babylonian Mystery Religion was widely practiced, and one of its priests was even converted and baptized, but he erred when trying to buy the power of the Holy Spirit. (Acts 8:9-24) That Simon, a Samaritan sorcerer, had the same name as the Apostle Peter who rebuked him, and I do not think that he (sorcerer Simon Peter) walked away without the intension to adapt this new religion to his old one. The falling away that the Apostle Paul wrote about was already in progress during those early years of Christianity. (Col. 2:8; Gal. 2:4; 2 Th. 2; Jude 4) Even some of the popular converts can be found flip-flopping and disserting the faith to return to the world. (2 Tim. 4:10)