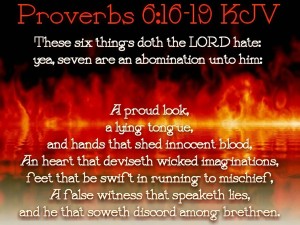 Although this is a repost it bears repeating for the fact there are so many liars among us in todays world, who have no fear of God and are unaware of their fate!

Scripture tells us that no lie is of the truth, yet some still have no problem living a life of lies and deception and continue denying the very one who died to redeem their soul. (1 John 2:21-23) I have not written unto you because ye know not the truth, but because ye know it, and that no lie is of the truth. Who is a liar but he that denieth that Jesus is the Christ? He is an’-ti-christ, that denieth the Father and the Son. Whosoever denieth the Son, the same hath not the Father: (but) he that acknowledgeth the Son hath the Father also.

The life of a liar never works out, and God will even frustrate that person’s way to cause them to turn to Him while at the same time will confirm the message of those who are doing His will. (Isaiah 44:24-26) Thus saith the Lord, thy redeemer, and he that formed thee from the womb, I am the Lord that maketh all things; that stretcheth forth the heavens alone; that spreadeth abroad the earth by myself; That frustrateth the tokens of the liars, and maketh diviners mad; that turneth wise men backward, and maketh their knowledge foolish; That confirmeth the word of his servant, and performeth the counsel of his messengers; that saith to Jerusalem, thou shalt be inhabited; and to the cities of Judah, ye shall be built, and I will raise up the decayed places thereof.

The people of God cannot tolerate a liar in their midst as they know that no liar will ever see the kingdom of God and also a liar is not trustworthy at all!  (Psalm 119:160-163) Thy word is true from the beginning: and every one of thy righteous judgments endureth for ever. Princes have persecuted me without a cause: but my heart standeth in awe of thy word. I rejoice at thy word, as one that findeth great spoil. I hate and abhor lying: but thy law do I love.

The biggest enemy of the christian is the one who came as a thief to our life and it is none other than satan who wants nothing more than to kill, steal, and destroy our very soul! But praise God who has sent His Son to bring us the hope of eternal life for whosoever will be His follower! (John 10:10,11) The thief cometh not, but for to steal, and to kill, and to destroy: I am come that they might have life, and that they might have it more abundantly. I am the good shepherd: the good shepherd giveth his life for the sheep.

For those who feel to be flattered by someone means they are always speaking the truth would be surprised to learn that oftentimes it is working ruin and not good at all! The liar destroys with his mouth and hates those his words are directed at.(Proverbs 26:28) A lying tongue hateth those that are afflicted by it; and a flattering mouth worketh ruin.

There are people who do not believe God hates anything, but could not be more wrong! There are seven things listed in proverbs God hates including those who lie! (Proverbs 6:16-19) These six things doth the LORD hate: yea, seven are an abomination unto him: A proud look, a lying tongue, and hands that shed innocent blood, An heart that deviseth wicked imaginations, feet that be swift in running to mischief, A false witness that speaketh lies, and he that soweth discord among brethren.

The fate of the liar does not end well as we read in scripture (Revelation 22:14,15) Blessed are they that do his commandments, that they may have right to the tree of life, and may enter in through the gates into the city. For without are dogs, and sorcerers, and whoremongers, and murderers, and idolaters, and whosoever loveth and maketh a lie.

One thought on “The Fate Of The Liar”