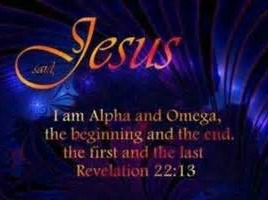 There is only one Alpha and Omega, the beginning and the ending of all creation….. The Lord Jesus Christ! When He returns to earth all eyes shall see Him. (Revelation 1:7-8).  Behold, he cometh with clouds; and every eye shall see him, and they also which pierced him: and all kindreds of the earth shall wail because of him. Even so,  Amen. I am Alpha and Omega, the beginning and the ending, saith the Lord, which is, and which was, and which is to come, the Almighty.

Even before Jesus was born the world was made aware of the majesty that would be entering the earth, and would be the hope of every man. The wise men said they had seen His Star in the east. (Matthew 2:1-2). Now when Jesus was born in Bethlehem of Judaea in the days of Herod the king, behold, there came wise men from the east to Jerusalem, Saying, Where is he that is born King of the Jews? for we have seen his star in the east, and are come to worship him.

He was the Star out of Jacob, and the scepter that would rise out of Israel! Just as we are told we are the Seed of Abraham, so is Israel/Jacob chosen and called from the foundation of the world. (Numbers 24:17)  I shall see him, but not now: I shall behold him, but not nigh: there shall come a Star out of Jacob, and a Sceptre shall rise out of Israel, and shall smite the corners of Moab, and destroy all the children of Sheth…… (Romans 8:29-31)….. (Isaiah 41:8-13).

We need not be over concerned if people flat out do not want to know the Lord, for He knows already those whose minds and hearts are set on knowing and serving Him! (Revelation 22:10-13).  And he saith unto me, Seal not the sayings of the prophecy of this book: for the time is at hand. He that is unjust, let him be unjust still: and he which is filthy, let him be filthy still: and he that is righteous, let him be righteous still: and he that is holy, let him be holy still. And, behold, I come quickly; and my reward is with me, to give every man according as his work shall be. I am Alpha and Omega, the beginning and the end, the first and the last.