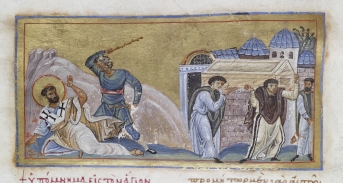 The Martyrdom of St. Timothy Two separate episodes are depicted within a single frame. On the left, Christ’s disciple Timothy is being clubbed to death by one of the pagans whose festival he had disrupted. He wears an episcopal stole (omophorion) because he is bishop of Ephesos. At the right, two men carry a coffin, while a priest before them swings a lit censer. This represents either the burial of Timothy at Ephesos or the translation (transfer) of his remains to the Constantinopolitan Church of the Holy Apostles in 356 The Walters Art Museum, Baltimore

Of more value than gold in the bank, the “Promises” from the Bible are well-known by most Christians. We have heard them proclaimed repeatedly whenever problems and troubles arise which plague the human heart.

Great they are, too, and exceedingly precious to the hearts of all Believers. They are TRUE words, as is the constant testimony of those who follow The LORD JESUS CHRIST, The Most Beloved SON+ forever.

These promises of GOD bolster our faith.

However, there is one UN-claimed Promise that no-one seems to claim for himself.

This one, UN-claimed Promise — for those who recognize its worth — is faith-stretching. It carries within its very essence the means for us, Followers of JESUS CHRIST to measure our walk.

Using this UN-claimed Promise, we can readily see the answers to these questions;

WHAT is this Precious, UN-claimed Promise, the one that is ASSUREDLY as PRECIOUS as all the other promises of GOD ?

It is the Promise that makes us all shudder, and hence, avoid it at all costs.

“And indeed, all those desiring to live GODLY in CHRIST JESUS will be persecuted.”

A Peek At the Greek…

In English, “persecution” is commonly understood as life-threatening harrassment or imprisonment or torture.

In Greek and Hebrew, however, it has the BASIC meaning of being driven out.

“Persecution” in the New Testament stems from the root of two Greek words, one of which means “to flee” and the other one “to pursue.” ( See 1375 and 1377 in Strong’s Concordance. )

Interestingly enough, the ONLY time “persecution” in the New Testament comes from a different root word  is in Acts 11:19, and that word accurately means “tribulation.” (See Strong’s # 2347.)

“To chase out or pursue hotly after” is the consistent meaning of persecute / persecution in the Hebrew language ,with all word forms stemming from a Hebrew root word which means “to pursue.”  (See Strong’s, #7291 and Young’s Concordance for persecution.)

Now, then, herein lies a problem

No-one LIKES persecution and no-one WANTS it as a daily companion. No-one chooses to be persecuted !

Scripture indicates, however, that persecution was the Daily Cup put before the Followers of JESUS.

In today’s world, the persecuted Followers of JESUS become the strongest Christians on earth.

Their cries, pleas, supplications, and intercessions are ANSWERED, as they endure the persecutions as Followers of The LAMB+ of GOD.

They are humble, knowing how to pray for their enemies, loving them and requesting their enemies to be delivered from the father of lies.

These STRONG Christians have lost all, for the most part, even family members. They know full well that at any moment they could seal their testimony for CHRIST JESUS with their blood.

Some of them live in despair, barely clinging to life from the blows of loss of loved ones, home, health, and income. Our LORD sees their LIVING sacrifice: after all, they did not DENY HIM+ and turn to the world or pagan, demonic religions to avoid their plight.

They stood the TEST.

Yes, when they recover from shock, these persecuted Christians become STRONG Followers of CHRIST.

Search out the testimonies of the church in North Korea, established in the midst of prison camps. Read about the Sudanese Christians living in the Nubian Desert, clinging solidly to The LORD and to each other.  Syrian Christians who have been ousted from their homeland are bearing the LIGHT of CHRIST to the muslim world.

What are WE DOING for the Kingdom of GOD, in comparison to these persecuted Followers of JESUS CHRIST ?

Yes, we all do what we can, but we have not been TESTED through the fires yet.

For every one shall be salted with fire

and every sacrifice salted with salt.

Ye are the salt of the earth: but if the salt have lost his savor,

wherewith shall it be salted?

It is thenceforth good for nothing, but

to be cast out, and to be trodden under foot of men.

Dear Salt, let us NOT LOSE our Savor

… and thereby lose our SAVIOR+.

Now is the Day of Preparation. We prepare for Persecution by drawing closer and closer to Our LORD JESUS CHRIST… now !

Now is the time — when all is quiet (on the surface ) to spend QUALITY QUIET TIME with HIM+. Now is the time ( in relative safety ) for each individual to learn to hear His+ Voice … UNMISTAKABLY.

If we are diligent to do these things, HE+ will guide us into Spiritual exercises that will help us retain the Salt HE+ has given to us. Hours of prayer, fasting, reading or reciting of Psalms, of our LORD’S Words, of the Apostles writings. Seeking to never be out of HIS+ Presence.

When the fire of persecution comes, then we will not be in shell-shock, but rather we will have our faces “set like flint” — as HE+ did — to determinedly go to Jerusalem and face the fire.

JESUS said, ” Behold, I+ give unto you AUTHORITY to tread on opheON, sharp-eyed ones ( serpents ) and scorpions and over all the power of the enemy and NOTHING shall by any means hurt  you. “ Luke 10:19

“All AUTHORITY is given unto ME+ in Heaven and on earth.”

Will the fire of persecution hurt us? Only… only… only if we fail to Follow our JESUS/YESHUA to the cross.

Pleasant to the flesh? NO… But the rewards are INESTIMABLE and  the fruit lasting unto Eternity.

Glory be to The FATHER,

and to The HOLY SPIRIT+ .

As it was in the beginning, is now and ever shall be, world without end.