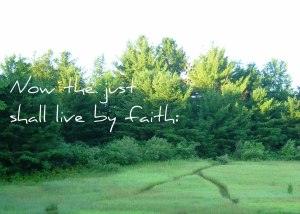 The just in scripture are those who have chose to live in obedience to the word of God,and it is the just who live by faith!(Hebrews 10:38-39), 38 Now the just shall live by faith: but if any man draw back, my soul shall have no pleasure in him.39 But we are not of them who draw back unto perdition; but of them that believe to the saving of the soul. (Romans 1:16-18).

Gods judgment is just and right and Jesus who was God in the flesh taught only the will of the one who sent Him,and His way was always justified (John 5:26-30). 26 For as the Father hath life in himself; so hath he given to the Son to have life in himself;27 And hath given him authority to execute judgment also, because he is the Son of man.28 Marvel not at this: for the hour is coming, in the which all that are in the graves shall hear his voice,29 And shall come forth; they that have done good, unto the resurrection of life; and they that have done evil, unto the resurrection of damnation.30 I can of mine own self do nothing: as I hear, I judge: and my judgment is just; because I seek not mine own will, but the will of the Father which hath sent me.

David whose lineage Christ our Saviour is from was just in serving as king over Israel,he knew Gods judgment was to be carried out over the land (2 Samuel 8:13-15). 13 And David gat him a name when he returned from smiting of the Syrians in the valley of salt, being eighteen thousand men.14 And he put garrisons in Edom; throughout all Edom put he garrisons, and all they of Edom became David’s servants. And the Lord preserved David whithersoever he went.15 And David reigned over all Israel; and David executed judgment and justice unto all his people.