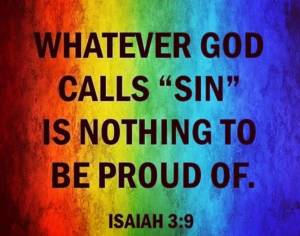 There is nothing new under the sun, for what God views as an abomination or sinful to Him has not changed since man was created upon the earth. HE is the same yesterday, today, and forever! As I watched an interview of one who was supporting their friend who is gay she said and I quote: People need to understand God is love and is accepting of anyone who chooses to love no matter how different it might seem. And we need to be more accepting of the differences in people because to be gay is to be a unique individual is all…. As she stood there holding a sign which read Love is Love. What? Once again there it is those who are supporting their sin saying God accepts perverted love. Christ came to save us from our sin, not to rename it and say it’s unique. To say men with men and women with woman is a love God smiles upon as the unity HE created would take the purity out of it. (Romans 1:26-32).  For this cause God gave them up unto vile affections: for even their women did change the natural use into that which is against nature: And likewise also the men, leaving the natural use of the woman, burned in their lust one toward another; men with men working that which is unseemly, and receiving in themselves that recompence of their error which was meet. And even as they did not like to retain God in their knowledge, God gave them over to a reprobate mind, to do those things which are not convenient; Being filled with all unrighteousness, fornication, wickedness, covetousness, maliciousness; full of envy, murder, debate, deceit, malignity; whisperers, Backbiters, haters of God, despiteful, proud, boasters, inventors of evil things, disobedient to parents, Without understanding, covenantbreakers, without natural affection, implacable, unmerciful:Who knowing the judgment of God, that they which commit such things are worthy of death, not only do the same, but have pleasure in them that do them. (Deuteronomy 22:5).

How foolish a nation have we become that sin can be a law that we are forced to accept. It is not God Almighty who created the heaven and earth are these people serving, but just as generations ago they are serving strange gods and new gods which came up in the land they flock to wherever their sin is supported. They have forgotten God their Rock which is a God of Righteousness. (Deuteronomy 32:16-20,31-33). They provoked him to jealousy with strange gods, with abominations provoked they him to anger. They sacrificed unto devils, not to God; to gods whom they knew not, to new gods that came newly up, whom your fathers feared not. Of the Rock that begat thee thou art unmindful, and hast forgotten God that formed thee. And when the Lord saw it, he abhorred them, because of the provoking of his sons, and of his daughters. And he said, I will hide my face from them, I will see what their end shall be: for they are a very froward generation, children in whom is no faith.  For their rock is not as our Rock, even our enemies themselves being judges. For their vine is of the vine of Sodom, and of the fields of Gomorrah: their grapes are grapes of gall, their clusters are bitter:Their wine is the poison of dragons, and the cruel venom of asps.

No matter how sin is packaged like the woman supporting her gay friend by white washing the truth. God looks at that sign that said Love is Love as a slap in his face for the love she was describing as right God calls an abomination, because His love is pure and undefiled and although they may marry at the altar of conformity to make it appear right because they are in a church they fail to note they are polluting His holy place that is no different when Jesus had to overturn the money changers in the temple when they thought it would be alright to turn His house into a den of thieves! Just as Judah was warned in their day to turn from their sin, and even though God sent His servants the prophets the people revolted just as they do today. (Jeremiah 7:25-30). Since the day that your fathers came forth out of the land of Egypt unto this day I have even sent unto you all my servants the prophets, daily rising up early and sending them:Yet they hearkened not unto me, nor inclined their ear, but hardened their neck: they did worse than their fathers. Therefore thou shalt speak all these words unto them; but they will not hearken to thee: thou shalt also call unto them; but they will not answer thee. But thou shalt say unto them, This is a nation that obeyeth not the voice of the Lord their God, nor receiveth correction: truth is perished, and is cut off from their mouth. Cut off thine hair, O Jerusalem, and cast it away, and take up a lamentation on high places; for the Lord hath rejected and forsaken the generation of his wrath. For the children of Judah have done evil in my sight, saith the Lord: they have set their abominations in the house which is called by my name, to pollute it.