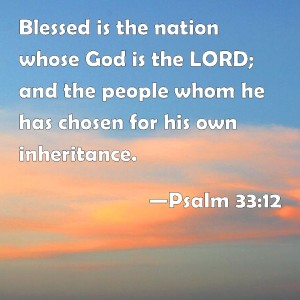 Many of us have within our families those who have gone off to war so that we may enjoy the freedoms we have. Sadly there are people who are claiming to be a christian and teaching patriotism is evil. Scripture does not teach such a belief!

God had patriarch’s who were our forefathers of the human race and of the Hebrew people. God had many prominent men who were patriarchs such as Abraham and David. God made an oath to David who was a patriarch that through his loins would our Lord and Saviour be raised to sit on His throne. This very same promise God had made to David is also offered to us and our children to this day! Peter spoke of this in his sermon to Jerusalem (Acts 2:29-39) Men and brethren, let me freely speak unto you of the patriarch David, that he is both dead and buried, and his sepulchre is with us unto this day. Therefore being a prophet, and knowing that God had sworn with an oath to him, that of the fruit of his loins, according to the flesh, he would raise up Christ to sit on his throne; He seeing this before spake of the resurrection of Christ, that his soul was not left in hell, neither his flesh did see corruption. This Jesus hath God raised up, whereof we all are witnesses. Therefore being by the right hand of God exalted, and having received of the Father the promise of the Holy Ghost, he hath shed forth this, which ye now see and hear. For David is not ascended into the heavens: but he saith himself, The LORD said unto my Lord, Sit thou on my right hand, Until I make thy foes thy footstool. Therefore let all the house of Israel know assuredly, that God hath made that same Jesus, whom ye have crucified, both Lord and Christ. Now when they heard this, they were pricked in their heart, and said unto Peter and to the rest of the apostles, Men and brethren, what shall we do? Then Peter said unto them, Repent, and be baptized every one of you in the name of Jesus Christ for the remission of sins, and ye shall receive the gift of the Holy Ghost. For the promise is unto you, and to your children, and to all that are afar off, even as many as the Lord our God shall call. (Psalm 78:70-72).

To be patriotic is to love ones country, and to teach patriotism is evil contradicts the word of God. In fact we could say God is patriotic since He loves the country Israel and has said Israel is His inheritance. A place He loves so much it is where one day He will return as all true christians know (Zechariah 14:1-4) Behold, the day of the LORD cometh, and thy spoil shall be divided in the midst of thee. For I will gather all nations against Jerusalem to battle; and the city shall be taken, and the houses rifled, and the women ravished; and half of the city shall go forth into captivity, and the residue of the people shall not be cut off from the city. Then shall the LORD go forth, and fight against those nations, as when he fought in the day of battle. And his feet shall stand in that day upon the mount of Olives, which is before Jerusalem on the east, and the mount of Olives shall cleave in the midst thereof toward the east and toward the west, and there shall be a very great valley; and half of the mountain shall remove toward the north, and half of it toward the south.

Many battles that were fought in scripture had God behind them in the fight! How many times do we read God saying “Do not fear them for I will go before you”. Key proof of this was if Caleb and Joshua did not believe God went before them they would have never entered the promised land! (Deuteronomy 1:28-33).

People who teach patriotism is evil do not understand that God Himself is a man of war, and it is He who teaches our fingers to war, especially in the good fight of faith! (Exodus 15:1-3) Then sang Moses and the children of Israel this song unto the LORD, and spake, saying, I will sing unto the LORD, for he hath triumphed gloriously: the horse and his rider hath he thrown into the sea. The LORD is my strength and song, and he is become my salvation: he is my God, and I will prepare him an habitation; my father’s God, and I will exalt him. THE LORD IS A MAN OF WAR: the LORD is his name. (Psalm 18:29-40).

God Bless all who go to war for to protect our freedoms!

UNITED WE STAND…. DIVIDED WE FALL.