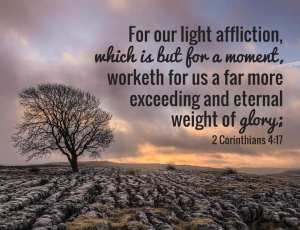 As Christians we are to cease from living as we once did in a life of the flesh not being concerned with any involvement of sin. But when turning to the Lord with a repentant heart so starts a trial we may not expect, yet so needed if we understand the reproach and sufferings of the one we now follow. (1 Peter 4:1-6).  Forasmuch then as Christ hath suffered for us in the flesh, arm yourselves likewise with the same mind: for he that hath suffered in the flesh hath ceased from sin; That he no longer should live the rest of his time in the flesh to the lusts of men, but to the will of God. For the time past of our life may suffice us to have wrought the will of the Gentiles, when we walked in lasciviousness, lusts, excess of wine, revellings, banquetings, and abominable idolatries: Wherein they think it strange that ye run not with them to the same excess of riot, speaking evil of you: Who shall give account to him that is ready to judge the quick and the dead. For for this cause was the gospel preached also to them that are dead, that they might be judged according to men in the flesh, but live according to God in the spirit.

Although it does not seem a joyous time when going through a trial of any kind, if it be for serving Christ then our faith being tried works patience for our good. (James 1:2-4).  My brethren, count it all joy when ye fall into divers temptations; Knowing this, that the trying of your faith worketh patience. But let patience have her perfect work, that ye may be perfect and entire, wanting nothing.

If we do what is right then it does not bother us if God were to test us and try our hearts, but it is the way God has chosen to repay us the fruit of our doings. (Jeremiah 17:9,10).  The heart is deceitful above all things, and desperately wicked: who can know it? I the Lord search the heart, I try the reins, even to give every man according to his ways, and according to the fruit of his doings.

The next time there is a trial in your life remember God is on the throne, and is ever aware of your situation. He truly does take that which is directed at us for evil and will turn it to good. Proof of this is in the story of Joseph who was hated by his siblings and was even sold by his brothers, BUT GOD moved on his behalf for the good! It was Gods will and grace over him that his brothers evil agenda was not carried out! (Genesis 37:15-36).

When Joseph by the Holy Spirit was able to interpret Pharaoh’s dreams he rose to power. 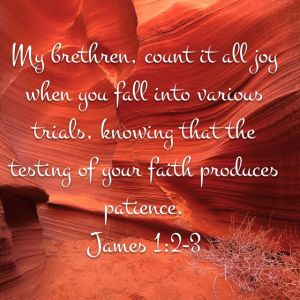 One thought on “Various Trials”