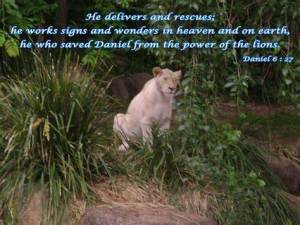 There has always been signs in the earth by God for either blessing or correction. Sometimes they are loud and clear while others are more subtle. King Da-ri’us saw first hand the powerful sign of God when Daniel was put into the lions den and how God closed the mouths of the lions and Daniel was found not hurt because he believed in his God! ( Daniel 6:19-28 ).

Simeon was a man filled with the Holy Spirit who was told he would not see death until he had seen the Lords Christ. It was Simeon who told Mary that her Son was set for the fall and rising again of many in Israel, and would be a sign who would be spoken against. We know this sign to be true as Jesus life was one of persecution, just as those who follow Him are persecuted for His names sake. ( Luke 2:25-26,34-35 ),25 And, behold, there was a man in Jerusalem, whose name was Simeon; and the same man was just and devout, waiting for the consolation of Israel: and the Holy Ghost was upon him.26 And it was revealed unto him by the Holy Ghost, that he should not see death, before he had seen the Lord’s Christ.34 And Simeon blessed them, and said unto Mary his mother, Behold, this child is set for the fall and rising again of many in Israel; and for a sign which shall be spoken against;35 (Yea, a sword shall pierce through thy own soul also,) that the thoughts of many hearts may be revealed.( Isaiah 8:18 ).

Moses was instructed to speak to the people a message for his generation and throughout the generations the sign between the people to keep the sabbath. ( Exodus 31: 12-18 ).