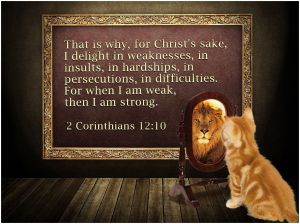 No one likes to be rejected for any reason, but when the rejection is of our own it seems more hurtful. Jesus too experienced the turning away of His own when it was revealed the knowledge of God dwelt within Him. They were actually offended in Him! (Matthew 13:54-58).  And when he was come into his own country, he taught them in their synagogue, insomuch that they were astonished, and said, Whence hath this man this wisdom, and these mighty works? Is not this the carpenter’s son? is not his mother called Mary? and his brethren, James, and Joses, and Simon, and Judas? And his sisters, are they not all with us? Whence then hath this man all these things? And they were offended in him. But Jesus said unto them, A prophet is not without honour, save in his own country, and in his own house. And he did not many mighty works there because of their unbelief.

Surely if Jesus the Son of God was rejected then no one would ever reject God? If only this were true, but we see when the people wanted a king to rule over them Samuel was disappointed and he felt rejected. When he prayed to the Lord about the matter the Lord said it wasn’t he they were rejecting but the Lord God Himself. The Lord told Samuel to tell the people how it will be to place a king over them, but that they should know when they start to cry unto Him He will not hear them(1 Samuel 8:6-8).  But the thing displeased Samuel, when they said, Give us a king to judge us. And Samuel prayed unto the Lord. And the Lord said unto Samuel, Hearken unto the voice of the people in all that they say unto thee: for they have not rejected thee, but they have rejected me, that I should not reign over them. According to all the works which they have done since the day that I brought them up out of Egypt even unto this day, wherewith they have forsaken me, and served other gods, so do they also unto thee.

Part of being a servant of Christ is to be rejected for speaking the word of God, and as written many will fall away when persecution for Christs sake happens, but remember whosoever does not hear nor receive our message of hope it is then we shake the dust off our feet as a testimony against them(Mark 6:10-11).

It is an honor to suffer for Christ and we are blessed because of it, whether it be of our own household or a stranger! (Matthew 5:10-12) 10 Blessed are they which are persecuted for righteousness’ sake: for theirs is the kingdom of heaven. 11 Blessed are ye, when men shall revile you, and persecute you, and shall say all manner of evil against you falsely, for my sake. 12 Rejoice, and be exceeding glad: for great is your reward in heaven: for so persecuted they the prophets which were before you.

8 thoughts on “Rejection is part of being a Christian”