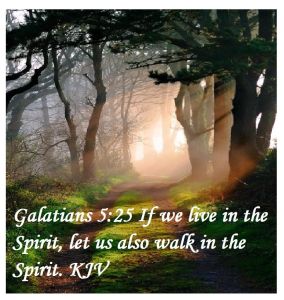 Scripture teaches us there are two distinct spirits in the earth. The one is Gods holy spirit and the other being the spirit of the world. Paul gives a great account of what happens when one is guided by the worlds spirit,but then by repentance receives the holy spirit of God which then directs ones life.Paul knew that even after persecuting the church itself and although he may of gained many things in the end it was a loss for Christ as he then lived by the spirit of God! (Philippians 3:7-11).  But what things were gain to me, those I counted loss for Christ. Yea doubtless, and I count all things [but] loss for the excellency of the knowledge of Christ Jesus my Lord: for whom I have suffered the loss of all things, and do count them [but] dung, that I may win Christ, And be found in him, not having mine own righteousness, which is of the law, but that which is through the faith of Christ, the righteousness which is of God by faith: That I may know him, and the power of his resurrection, and the fellowship of his sufferings, being made conformable unto his death; If by any means I might attain unto the resurrection of the dead.

When a person comes to Christ their life is never the same,their new found knowledge in the Lord is not accepted by those who surround them. They soon realize the spirit that dwells within them is different than the spirit of the world they used to be a part of. Those who are of the world and it’s ways hear each other, but those born of the holy Spirit are not accepted as they once were, and sadly even of their own household! (1 John 4:4-6) Ye are of God, little children, and have overcome them: because greater is he that is in you, than he that is in the world. They are of the world: therefore speak they of the world, and the world heareth them. We are of God: he that knoweth God heareth us; he that is not of God heareth not us. Hereby know we the spirit of truth, and the spirit of error.

The spirit of God speaks of spiritual things which the world views as foolishness. The difference is the spirit of the world reaps death while the spirit of God gives life everlasting! (1 Corinthians 2:9-16) But as it is written, Eye hath not seen, nor ear heard, neither have entered into the heart of man, the things which God hath prepared for them that love him. But God hath revealed them unto us by his Spirit: for the Spirit searcheth all things, yea, the deep things of God. For what man knoweth the things of a man, save the spirit of man which is in him? even so the things of God knoweth no man, but the Spirit of God. Now we have received, not the spirit of the world, but the spirit which is of God; that we might know the things that are freely given to us of God. Which things also we speak, not in the words which man’s wisdom teacheth, but which the Holy Ghost teacheth; comparing spiritual things with spiritual. But the natural man receiveth not the things of the Spirit of God: for they are foolishness unto him: neither can he know them, because they are spiritually discerned. But he that is spiritual judgeth all things, yet he himself is judged of no man. For who hath known the mind of the Lord, that he may instruct him? But we have the mind of Christ.

Many of us know people that all they say is about themselves, yet they claim to be a christian. It is high time we learn that if Christ is in us then this life is not all about us, but is about Him (John 7:16-18) Jesus answered them, and said, My doctrine is not mine, but his that sent me. If any man will do his will, he shall know of the doctrine, whether it be of God, or whether I speak of myself. He that speaketh of himself seeketh his own glory: but he that seeketh his glory that sent him, the same is true, and no unrighteousness is in him.

The spirit of God calls us to freedom,we are not called out of the world only to return to live as we once did, but are called out of darkness into the marvelous light of Christ and the truth which resides in Him. We may stand out as different when born of the Spirit, but we must remember even our Lord was not accepted of His own!(John 1:10-14) He was in the world, and the world was made by him, and the world knew him not. He came unto his own, and his own received him not. But as many as received him, to them gave he power to become the sons of God, even to them that believe on his name: Which were born, not of blood, nor of the will of the flesh, nor of the will of man, but of God. And the Word was made flesh, and dwelt among us, (and we beheld his glory, the glory as of the only begotten of the Father,) full of grace and truth. 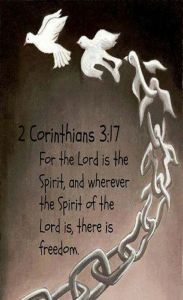